PALM SPRINGS, Calif. — As counterintuitive as it sounds, the COVID-19 pandemic couldn’t have come at a better time for The Lights at Indio Golf Course in the spring of 2020.

“We got lucky, because at the time COVID came, we’d been pushing so hard to get this place out there,” said Dave Ruvolo, head professional for 18 years at the city-owned 18-hole par-3 lighted golf course. “We’re the only thing in the valley that has (lights). A lot of people come into town but don’t know. So we pushed so hard to publicize it, and the timing was perfect.”

Like golf courses throughout the desert and across the country, The Lights has benefitted from a surge in golf that was partially sparked by the pandemic. As other sports and recreational activities shut down from the coronavirus, golf was allowed to be played. The sport attracted more individuals and saw more rounds played than had been true in more than a decade.

As the surge moves into its third year, golf course operators expect better results in the coming months than even the increases they saw one year ago.

“We are not seeing a high drop off in golfers just because the demand is there,” said Ben Rodny, director of sales and marketing for the 36-hole Indian Wells Golf Resort. “The demand for groups, tournaments, individual players, it’s pretty hot right now.”

More players at desert golf courses is good for the revenues at facilities that saw players and rounds of golf slide downward for most of the 2010s. But it also means more competition for tee times at public and private facilities as well as increased green fees for courses that can justify higher prices based on supply and demand.

In its tracking of rounds played across the country this year, the National Golf Foundation confirms that the Coachella Valley remains one of the most sought-after markets for golfers. While rounds played in California are down 4.6 percent this year through September compared to the same time period in 2021, and rounds in the country are down 2.5 percent, rounds in the Coachella Valley are up 12.4 percent in the first nine months of the year.

The NGF reminds people that even the small decreases in the state and the country as a whole are in comparison to 2021, when rounds of golf were up as much as 20 percent in parts of the country from 2020.

One reason golf continues to grow in the desert while it has flattened in other areas of the country is the Coachella Valley’s national and even international appeal as a golf destination.

“My wife and I have played in most of the areas in the United States,” said Stephen Clarke of Birmingham, England, who along with his wife was playing a variety of courses in the desert in late October, including at Marriott’s Desert Springs Resort in Palm Desert. “We had some miles we wanted to use for flights, and we thought we would come and play where the sun always shines.”

Golfing tourists are just one reason many desert facilities saw more golfers in the last 12 months than ever before.

“Last year was a record for us,” said Ryan Szydlowski, director of golf at the city-owned 36-hole Desert Willow Golf Resort in Palm Desert. “We had our most rounds played ever, and it is public info, so it was 100,000 rounds played, and that is about as much as we could tolerate.”

Szydlowski said Desert Willow’s number stems from having a variety of golfers come to the Firecliff and Mountain View courses, including residential play to hotel guests to group outings. For Desert Willow, the numbers look just as good for the 2022-23 season.

“All of our forecasting tools are tracking well. Our outings are pacing well, our weddings and other banquets are pacing well,” Szydlowski said. “Our loyalty program sold out in record time. So I feel like we will have a better year this year than we had last year.”

“That is absolutely the expectation,” Rodny said. “We are trying to temper ourselves, because the goal is not to fleece anybody with the highest cost in the valley. The goal is to bring golfers out onto the course and celebrate events and ensure that everyone has the best experience we can provide.”

More players mean golf courses have an opportunity to charge more for their product. Green fees were up a year ago, and they will go up again at some facilities in the coming months. At the Indian Wells Golf Resort, Rodny said the green fees from January through April will be $219 weekdays and $239 weekends, compared to $199 and $219 last year, when the courses were attracting more than 400 players on weekends. 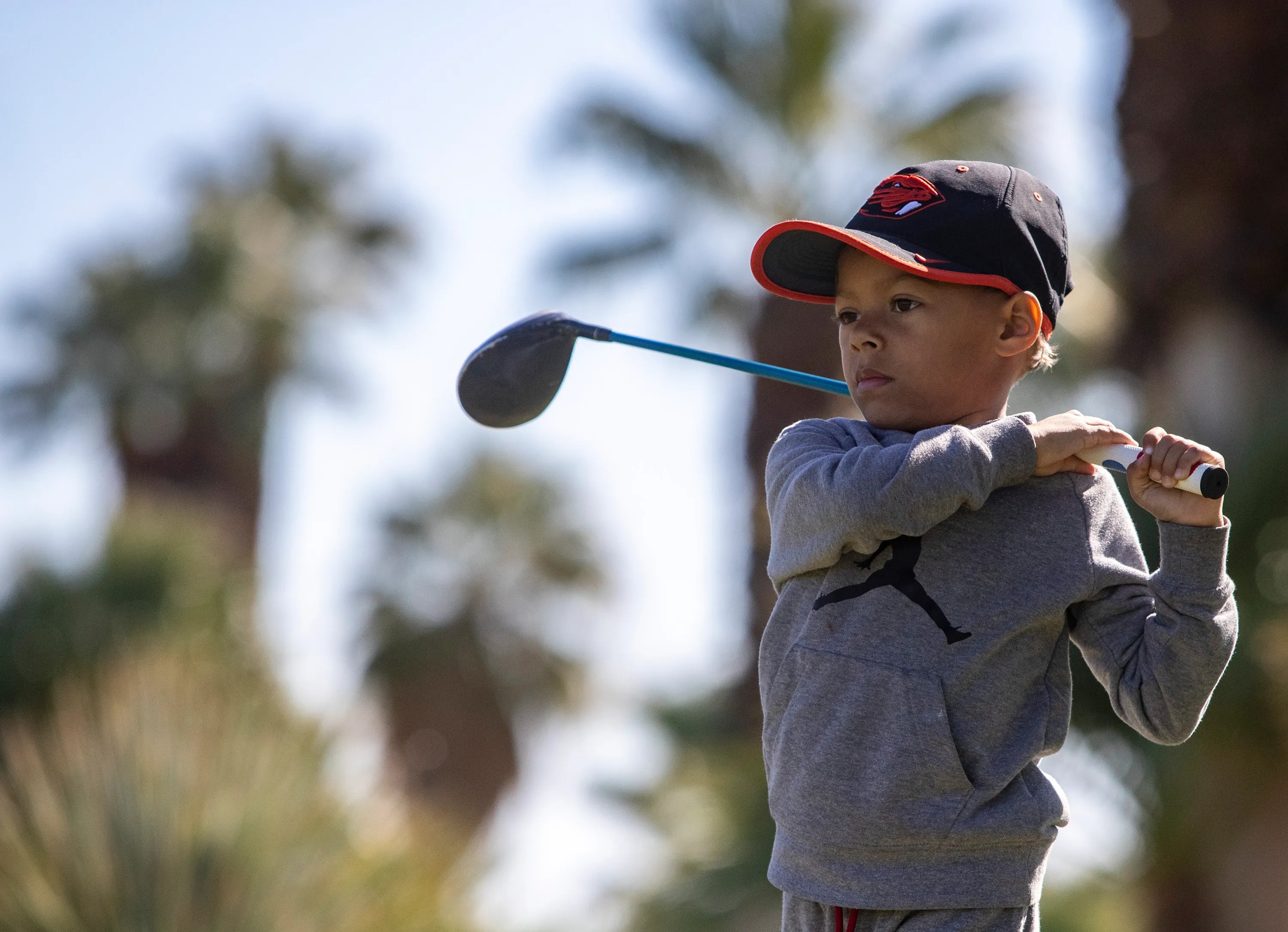 Four-year-old Xander Dockery watches his ball after hitting his drive at The Lights at Indio in Indio, Calif., Saturday, Nov. 19, 2022. (Photo by Andy Abeyta/The Desert Sun)

“We are just trying to treat everyone who comes in here as well as we can,” Rodny said. “Look, the ride isn’t going to last forever. The wave rises, the wave crashes. So when the wave crashes, we are going to depend on these golfers that kind of love IWGR to come back and play even though the economy might not be in the best place then. If we give them that experience now, then they are going to come back.”

Szydlowski said Desert Willow will be increasing its green fees across all player categories as well, but perhaps won’t be looking for more players.

“I think our rates could be much higher, but we are never going to raise them a crazy amount because we want to be in a position to keep our guests for the long term,” Szydlowski said. “We know that it is not going to be like this forever, right? But when our outing rounds recede, which they inevitably will, we want our loyalty members and our Palm Desert residents to fill in those gaps as they happen.

“So we don’t really see a big decrease in rounds played, we might see a shift in who is playing,” Szydlowski added.

Even as golf surges, facilities like Desert Willow and Indian Wells Golf Resort are pursuing other reasons for golfers and non-golfers to come to their courses. Rodny is helping to oversee changes to the IWGR’s Shots in the Night nighttime entertainment on the driving range and putting greens near the clubhouse, as well as the installation of an ice skating rink. At Desert Willow, new patio furniture for outdoor dining as well as a new fleet of golf carts will arrive in December and are both designed to enhance a golfer’s experience.

“So all those little things that need upgrading over the years, we are taking advantage of that right now,” Szydlowski said. “In terms of the valley, I feel like when we talk to hotel partners, they are still seeing the same trends as well.”

It isn’t just resort courses feeling the pressure of more golfers. At the 36-hole Mountain Vista Golf Club at Sun City Palm Desert, director of golf Joe Johnson says the new season is off to a packed start.

“Right now what I am seeing is every one of my Canadians is back,” Johnson said. “I don’t know that there is going to be a trickle-in after the first of the year like there always is. I think they are all here now. Everyone is here. It has just been magic.”

Johnson said Mountain Vista has hosted 240 players a day on its Santa Rosa course while its San Gorgonio course was closed for overseeding. With both courses open now, Johnson said the course will resort to shotgun starts to accommodate more players. A shotgun start sees golfers all starting at the same time, but on different holes, rather than just teeing off on the first hole with tee times.

“The first week of December, we are going to run Monday and Friday shotguns on one of our golf courses at 8 o’clock and 1 o’clock to follow. We’ll always have one course open for tee times, for those who don’t want to limit themselves to an 8 o’clock start, and then they can play twilight at 12 o’clock if they want,” Johnson said. “So we basically can put out 132 to 136 players in a shotgun. That’s more than a full field, that’s two foursomes per hole. So we do that, and we do another 124 players at 1 o’clock at the twilight rate.”

That means on Mondays and Fridays, Mountain Vista will see almost 500 players a day on its two courses.

The trends may be the same, but at a lower financial level at The Lights, where golfers are more likely to show up in t-shirts and tennis shoes than at the high-end resort courses in the desert.

Ruvolo has already seen evidence of a continuing increase in play at The Lights this fall.

“A lot of the people who come and play are like snowbirds, RVers, and so they really aren’t down here yet. But what’s funny is when the weather gets bad up there, they come down here immediately, whether it is October or September, whatever,” Ruvolo said. “So this year, I guess the weather got cold pretty quick up (in Canada), so they were here in October.”

That doesn’t mean there haven’t been a few price changes at The Lights. At the facility’s popular lighted driving range, COVID-19 meant the end of staff handling buckets of golf balls.

For now, Ruvolo and others in the desert golf world see the upswing in golf continuing, an upswing that resulted from the pandemic.

“COVID hit and COVID just ignited it. I went double and triple on everything,” Ruvolo said. “I’ve been here for 18 years, and I have seen faces I have never seen before. It’s like, who are you? And it’s just that the people were liking to play golf under the lights, and it is getting known.”

Lyle & Scott’s Golf Core Quarter Zip Merino Jumper is designed to keep you cool and comfortable on the course while easy to pair with either trousers or shorts. Lyle & Scott Golf ...

It’s hard not to feel a little bittersweet as the season I rediscovered golf comes to a close, but maybe it’s a blessing in disguise.  Most of us understand how difficult it is to ...