More than a decade later, In Gee Chun might deliver a similar master class.

The soft-spoken South Korean, a two-time major champion, put together one of the most dominant rounds in recent memory, carding nine birdies en route to a course record of 8-under 64. The Blue Course, which has hosted five previous majors, recently underwent a complete renovation.

Only six other players in the morning wave broke par, and all six shot 1-under 71. World No. 2 Nelly Korda was among them and was quite pleased with the round, given how long the course played. When Chun walked off the course, the scoring average was 76.01.

Congressional received two inches of rain overnight and early groups played in 10 or more holes in the rain Thursday morning on what turned into a slow grind. Inbee Park expected several tees to be moved up given the soft conditions but said the actual yardage of 6,809 yards felt more like 7,200, calling it “a beast.”

“I am one of the longer hitters on tour,” said Korda. “It was long.”

After coming to the course early for a preview last week, Chun decided to put a 7-wood in the bag. Caddie Dean Herden said she hit it four times  Thursday and flushed it every time, leaving herself nothing more than 10 feet.

Chun took only 25 putts and notched nine birdies on the day. Herden noted that the performance reminded him of when Chun won the 2015 U.S. Women’s Open at Lancaster Country Club, the first time they ever worked together. The only shot she missed all day at Congressional, he said, was a thinned 9-iron on the eighth. 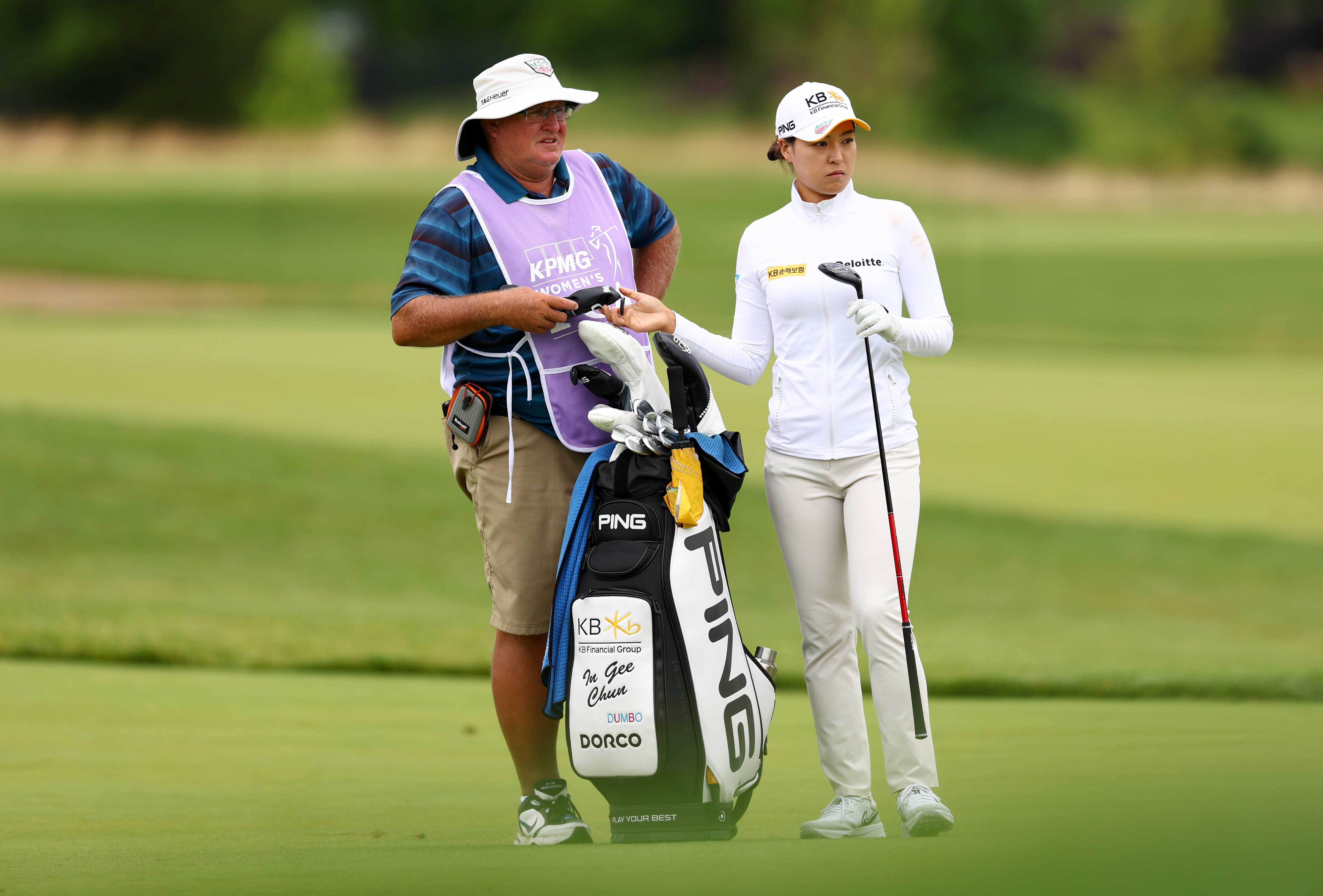 In Gee Chun stands with her caddie during the first round of the 2022 KPMG Women’s PGA Championship at Congressional Country Club in Bethesda, Maryland. (Photo: Elsa/Getty Images)

Chun, who is trying to enjoy herself more inside the ropes, said conversations with Herden that don’t involve golf help keep her relaxed.

“We talk about my pimple on my lip,” she said, laughing. “So I bit, like, one time before, and then it got bigger and bigger, so I bit more than five times.

“Then we talk about the kiwis because I love to eat kiwis on the course. Especially it’s really tough to find a good kiwi from the supermarket. Luckily, we have a good Korean supermarket near here, so I got a good gold kiwi from there.”

While Chun was able to keep things light, everything about the day felt heavy to most. The par-5 ninth, at 587 yards uphill and into the wind and rain, required long-bombing Brooke Henderson to hit driver, 3-wood, hybrid. She called it the longest par 5 of her life.

Nelly Korda found herself hitting 5-irons into par 4s, noting that Park couldn’t even reach the par-4 fourth with her 3-wood. 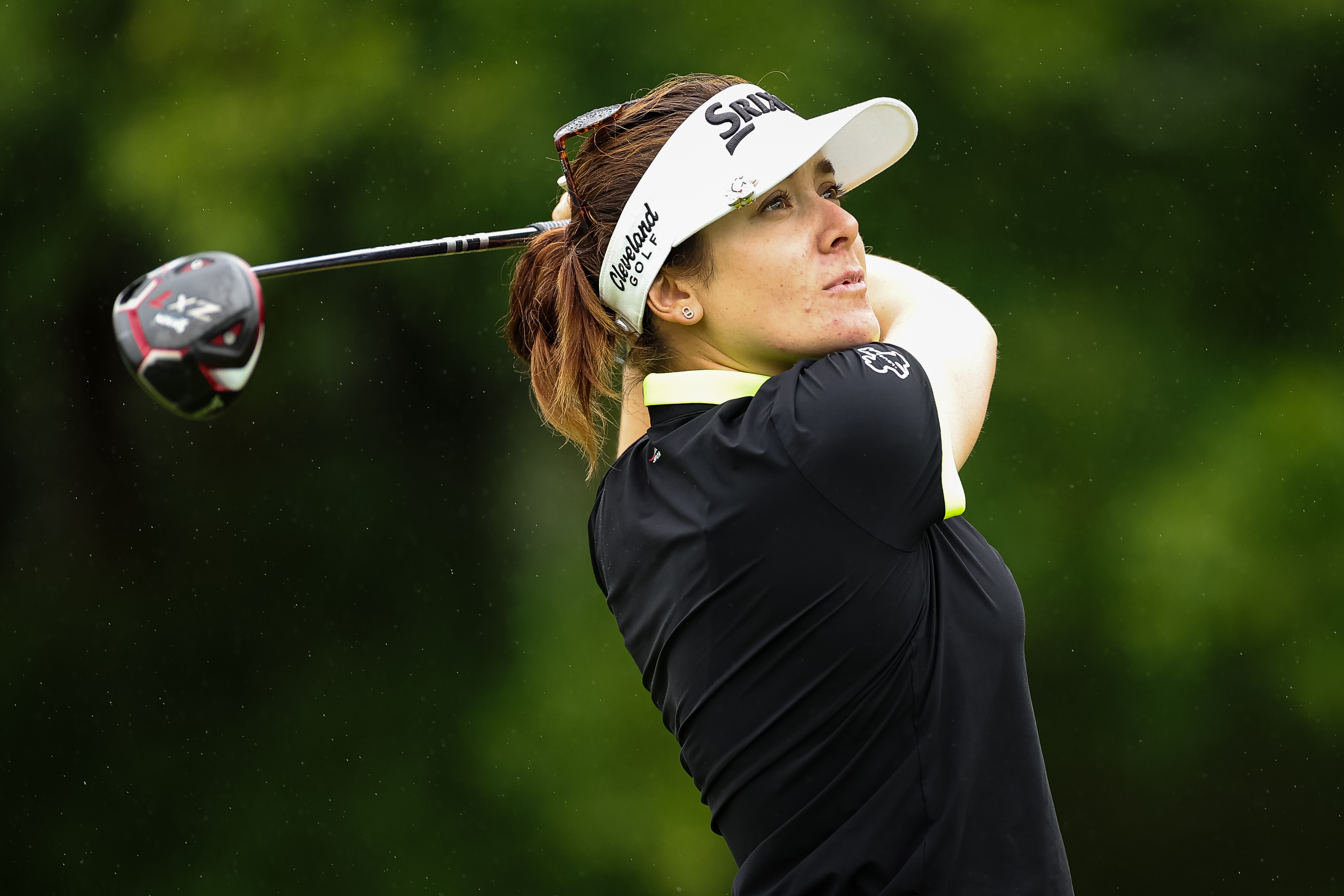 Hannah Green plays her shot from the 11th tee during the first round of the 2022 KPMG Women’s PGA Championship at Congressional Country Club in Bethesda, Maryland. (Photo: Scott Taetsch-USA TODAY Sports)

Hannah Green, the 2019 KPMG champ, has picked up 11 yards of carry in recent years and said had she not, she probably would’ve shot 3 over par – at best.

Instead, a longer Green shot 1 under despite hitting 5-wood in for her third shot into the ninth and a couple of hybrids into par 4s and par 3s.

“It has made a big difference,” she said.

Jennifer Kupcho, who won the first major as well as the Meijer LPGA Classic in a playoff last week, worked out a tweak in her driver by standing closer to the ball. She hit all 14 fairways in Round 1 to shoot 1 under.

“I feel like I played really well,” said Kupcho. “The course is really hard. I don’t really know how In Gee is 8 under right now.”

Yesterday the online community forum that is part of this website surpassed 8 million posts. While that number is fairly arbitrary to most, to us it is a continued sign of engagement by a wonderful ...

Jordan Spieth, Bryson DeChambeau, Zach Johnson all made a name for themselves at John Deere Classic. How one tournament director wooed top young talent to America's Heartland

"You try to do your homework and identify guys in this case that were going to be successful as athletes."

WHS explained: Can we play from different tees in the same competition?

Anyone else find playing off the back tees every time they go out competitively a bit of a bore? Maybe it’s just me. There are others who enjoy nothing more than taking on a course at its ...